Underwater archaeological prospection is carried out using various sensors which measure the physical characteristics of the site, and aims to highlight the anomalies likely to correspond to remains. A boat, equipped with measuring instruments and acquisition and processing computer systems, traverses the search area along parallel straight lines, called profiles, spaced at 30 to 80 meters depending on the average depth of the site and the size and nature of the remains anticipated.

The boat is positioned in real time by a system of differential satellite positioning (DGPS). NMR magnetometers and side scan sonar, positioned by electric winches are towed by the vessel surface in shallow areas or submerged by hydrodynamic sinkers in deeper water. An acoustic positioning system continuously transmits the relative position of the towed sensors. 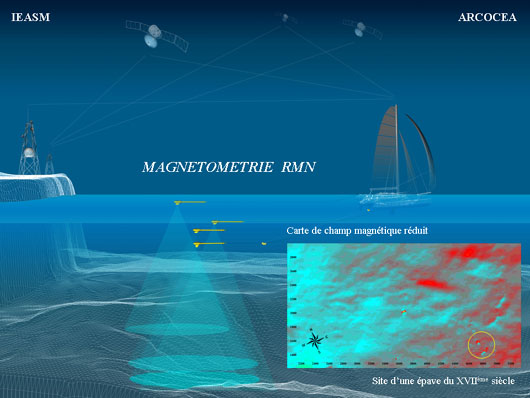 The boat is also equipped with high-definition echo sounders. All recorded parameters are subject to a first real-time analysis during prospection. Daily data processing resulted in the creation of bathymetric maps (seafloor relief) and magnetometer (magnetic field) of the surveyed area, complemented by a sonar image of the seafloor (acoustic photograph). The techniques of geophysical analysis highlight discontinuities in the measured parameters, like the ambient magnetic field or the acoustic response. These discontinuities or contrasts are called anomalies.

In archaeological applications, the amplitude of interesting anomalies is particularly low. They are often combined with many natural geological anomalies, which are also measured by the sensors, and which therefore require distinguishing. The effectiveness of this discrimination rests on the sensitivity of the sensors, their configuration and implementation, the processing of the data, and the correlating analysis of the results of the measurements of the different instruments. A first visual inspection and often submarine surveys are then carried out by experienced divers or instrumented robots to identify the origin of the anomaly measured.

NMR MAGNETOMETERS
The main sensors of the prospecting system of the IEASM are Nuclear Magnetic Resonance magnetometers. These very sensitive sensors have been developed by the French Commissariat à l’Energie Atomique (CEA). Based on the double magnetic resonance of protons and electrons (Abragam-Overhauser effect), these NMR magnetometers measure the absolute value of the geomagnetic field more than a thousand times per second with a precision of a fifty-millionth of its value.

The theory.
The sensor is a field/frequency converter based on the principle of nuclear magnetic resonance amplified by dynamic electronic polarization. The hydrogen atoms of standard solvents have a magnetic spin proportional to their spin (magnetic movement). Exposed to the Earth’s magnetic field, they precess around the field at a frequency proportional to its module (called the Larmor frequency, from 1 kHz to 3 kHz in the Earth’s magnetic field). The electromagnetic excitation of resonance creates, by the phase coherence of spin, a macroscopic magnetic component precessing at the Larmor frequency. This component induces an AC voltage in the detection coil. The measured frequency gives the value of the magnetic field. The nuclear magnetism created is not directly detectable in the earth’s magnetic field. Dynamic electronic polarization amplifies the nuclear signal by a factor of 1000. The nuclear spins are coupled to the spins of the free electrons of a radical in solution.

Two frequencies of the excitation of the electric resonance are possible: one generates a positive polarisation and the other a negative polarisation. The frequency depends on the solvent used. The careful selection of a pair of the same radical containing solvents will give at the same frequency, a factor of a positive polarisation in one solvent and a factor of negative polarization in the other. This is called the double Overhauser-Abragam effect. The probe consists of two separate flasks of hydrogenated solvents containing a free radical in solution, a excitation circuit of dynamic polarisation at high frequency and a low frequency circuit which respectively and simultaneously excite nuclear resonance and measure the signal. Thus the probe also includes two symmetrical coils placed in opposition.

Geomagnetism.
Earth’s magnetic field superimposes complex phenomena in time and space (geology of the crust, dynamo, solar-terrestrial interaction, the circulation of ionospheric and telluric currents, etc.), involving magnetic and electrical properties. The Earth’s magnetic field can be schematically considered as bipolar with a value between 20000 nano-Tesla (NT) at the equator and 60,000 NT at the poles, to which are added a range of global anomalies (of the order of 10,000 NT), local anomalies with geological origins, and transient phenomena of some tens of NT every 24 hours.

Application to archaeology.
Magnetic anomalies caused by the archaeological remains are superimposed on these natural anomalies. The discrimination between these is based on the very high sensitivity of magnetometers and, if necessary on the measurement of the local magnetic gradient between two towed sensors simultaneously. This reduces gradient reading reduces in real-time temporal variations in the geomagnetic field and allows the rejection of most geological anomalies.

This method using NMR magnetometers can detect very weak magnetic objects, even when deeply buried in sediment. In the Bay of Aboukir, prospecting the search area (110 km2) with a 10m grid requires 22,000 km to be travelled! Moreover, this magnetic survey must meet specific standards: the lines followed by the magnetometer sensors, and thus the boat, should be straight and parallel, at a constant speed and orientation, without any abrupt changes in elevation. Ultimately, only exceptional weather conditions allow satisfactory results to be obtained.

SIDESCAN SONAR
This sensor delivers an acoustic image of a strip of the seabed of 50 to 150 meters on each side of the ship. It reveals rocks or other prominent objects resting on the bottom and can give an indication of their size by a measurement of their projected shadows. The quality of the acoustic images of the seabed depends on the reflectivity of sediments. Several parameters classify the type of side-scan sonar, such as the acoustic frequency, the depth, the width of the beam (horizontal and vertical), and the duration and rate of the pulse. A transducer or "fish" is attached to a cable connected to the boat, thus enabling sound waves to be transmitted perpendicular to the direction of the boat, which are then reflected off the sea floor to be captured by the "fish". Several waves are recorded according to the degree of reflectivity, depending on the type of sediment. An irregular bottom has a lesser degree of reflectivity than a smooth sandy bottom. Obstacles and irregularities that prevent the direct reflection of the sound waves form shadows on the readings. The resulting electronic image reveals the relief of the seabed.