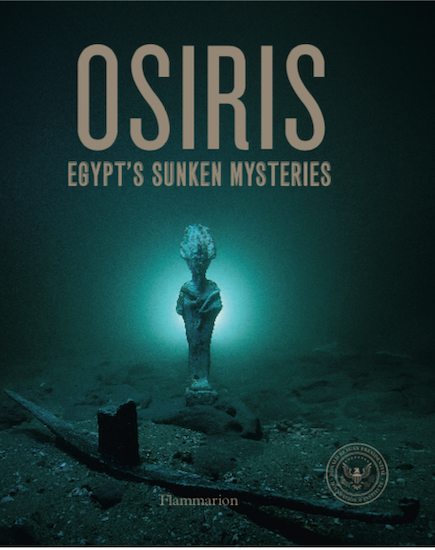 Time may have eroded the memory of a civilization but not the mystery of what was. Long ago, two bustling cities in ancient Egypt were known throughout the world as cultural centers of power, of wealth, of trade, and novel artistry. One day as the Mediterranean sun beat down on the bay of Aboukir, the cities slipped into the sea without a whisper of wind, buried for centuries.

Who wouldn’t dream of unearthing lost antiquities from a forgotten civilization, sunken into obscurity? Determined to recover the cities that vanished, Franck Goddio, a mathematician by trade and underwater archeologist at heart, delivered the discovery of a millennium for he located not a shipwreck but an entire civilization.

The antiquities in the exhibition, Egypt’s Lost Cities, submerged for millennia, are now unveiled to explore at the Ronald Reagan Presidential Library & Museum. Exposing the mysteries of Osiris, the exhibit reveals an elaborate civilization that crafted extraordinary objects, seen only by priests and pharaohs. Objects, both monumental and miniscule, capture the magic of a pure and moving moment in Egyptian history.

Presenting historically significant exhibitions at the Reagan Museum is essential to understanding our complex world. Previously, the stories of Vatican Splendors, relics from Pompeii, the impact of Genghis Khan, or the Titanic tragedy have filled our galleries with a hard glimpse into yesterday’s mysteries. Staying true to our plan, I am honored to present, “Egypt’s Lost Cities” and can relate personally.

Before joining the Reagan Foundation and Institute, I had the opportunity to serve as President of the Waitt Institute, a non-profit research organization dedicated to historical discovery. Our team found, authenticated and preserved the famed lost Gospel of Judas, the ancient text deemed to be heretical and ordered to be destroyed by the early Christian Church. In addition, I spearheaded the organization’s first deep-sea expedition to solve one of the last great American mysteries – the disappearance of Amelia Earhart during her global circumnavigation in 1937. As part of National Geographic’s “Genographic Project,” we charted the migratory history of mankind using DNA collected from indigenous populations around the world.

We are honored to present “Egypt’s Lost Cities” at the Ronald Reagan Presidential Library & Museum with the generosity of the Egyptian Ministry of Antiquities, the European Institute of Underwater Archeology (IEASM) and the Hilti Foundation. We are equally indebted to our Board of Trustees for their infinite guidance.