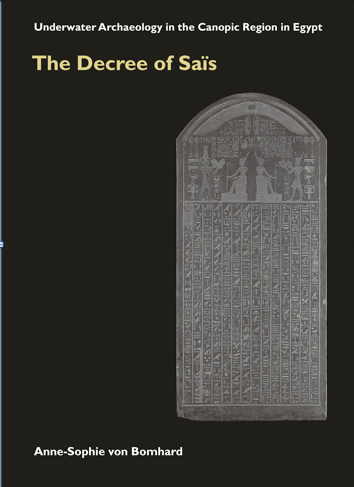 The author presents an edition of the stela found during underwater excavations in the Aboukir Bay, at the site of ancient Thonis-Heracleion, and inscribed with the Decree of Saïs.

The text is a parallel to that inscribed on another stela found at Naukratis at the turn of last century. The author gives an introduction to the discovery of the two stelae, as well as a description of the monuments, including the scenes and captions found in the lunette (Part II). von Bomhard goes on to discuss the arrangement of the texts and figures depicted on the decree, and the possible symbolism behind them.

The bulk of the text is occupied by a careful transliteration and translation of the text, followed by an exhaustive bibliography, an index of words discussed, a synoptic overview of orthographic and figurative variations, and an index of Egyptian words. This work contributes to the understanding of royal benefactions to temples and aspects of trade and taxation systems in force at the time of the decree.
•